By the 1960’s the original third floor U.S. District Courtroom, originally a double-height space finished in marble and mahogany, had been completely altered and reduced to a single story volume. IDEA was asked to design a completely new courtroom, and we were determined to incorporate design motifs from the existing rich Richardsonian Romanesque architectural vocabulary found throughout the building interior and exterior. New wood paneling with marble inserts, custom wood carved column capitals, decorative beams and ceiling brackets, and leather panel detailing were central elements of the new design. The final result was not intended to be a literal recreation of existing historic detailing but rather a sensitively-rendered courtroom meeting contemporary Federal Courts requirements of integrated technological and acoustical design. The second floor courtroom was originally a suite of postal service offices that had been modified into a severely Modern courtroom in the 1960’s. IDEA developed a layout for a new courtroom with jury box, jury room, counselor’s conference rooms, judge’s chambers and support offices within the constraints of the former office footprint. The courtroom was completely redesigned in conformance to the historic building character, and the chambers and support spaces feature significant historic features such as refinished marble mosaic floor tile and refurbished decorative pilasters. As in the third floor courtroom, state-of-the-art security and audio-visual accommodations were included in the renovation.

There was an almost-complete absence of archival drawings and photographs showing the original third floor courtroom layout and historic finishes. Intensive historic research could not unearth any reliable sources other than an early text description. The existing 1897 Ceremonial Courtroom across the atrium and the entrance lobby are rich in historic detail and use of traditional materials, especially carved wood, stone and marble mosaic tile, all of which provided an appropriate starting point along with the few courtroom drawing fragments discovered in the building archives. A new design scheme for the third floor was generated that highlights the prominence of the U.S. District Court and provides a completely up-to-date functional courtroom while clearly linking the new courtroom to its exceptional historic environment. The second floor courtroom faced the challenge of a limited budget with a more extensive square footage of renovated area.

Heritage Resource Survey At The University of Chicago 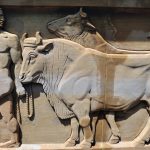