Interactive Design Architects has built a practice around sustained relationships with clients, engaging in a wide variety of projects that address evolving needs and ambitions.  There is perhaps no better example of this than IDEA’s work with the Lincoln Park Zoo, spanning dozens of projects over more than two decades.  The Robert and Mayari Pritzker Penguin Cove is the most recent success in this series of projects, designed in collaboration with exhibit designer, The Portico Group.

Upon entering the viewing enclosure, visitors are immersed in a naturalistic habitat, with only floor-to-ceiling glass separating human from penguin.  The enclosure was carefully designed to eliminate glare from the sun that would detract from the experience.  Rocks encrusted with mussels form an outcropping that allows children to climb and perch playfully while watching the penguins frolic in the 3,350 square foot outdoor exhibit.  The penguin’s side of the Cove is no less painstaking in is detailing, with burrowing and nesting areas along the shore for bonded pairs, among other features.

The exhibit is home to 12 African Penguins, but the cove is designed to accommodate a colony of up to 24-30 birds.  African penguins are particularly suited to Chicago’s year-round climate, which resembles the temperate beaches and islands that form their native habitat.  This allows the exhibit to be open-air, a departure from the former penguin house, which was inhabited by Antarctic species in a closed, climate-controlled environment.

The completion of the Penguin Cove, along with the new Walter Family Arctic Tundra exhibit, is the culmination of a series of projects that have reshaped the north end of the zoo, including the Regenstein African Journey, the Harris Family Foundation Black Rhino Exhibit, and the Regenstein Macaque Forest. 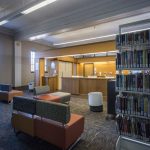 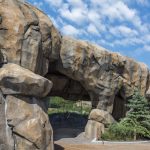