Renovation of the north exhibits

The renovation of the exterior Lion and Tiger exhibits on the north side of the Lion House involved a major rehabilitation of the generic habitats constructed in 1971. The existing habitats were characterized by large artificial rockwork backdrops, a large concrete-lined moat to separate the animals from the visitors, and nondescript landscaping. The goals of the renovation project were to create more naturalistic habitats, improve animal management facilities, and to create better visitor viewing opportunities.

Each area was designed to reflect the animals’ natural habitat. In the Siberian Tiger habitat, the addition of a water feature that contains cascading waterfalls, pools, and streams, and the use of coniferous plantings replicates the cold, forested features of this animal’s natural environment. The African Lion habitat features the addition of a large “kopje” outcropping (a large rock mass that rises out of the flat African plains). Such outcroppings give the majestic lion a high vantage point to view its territory. Figural trees and ornamental grasses were used to reinforce the African savanna theme of the habitat. The moats were planted with ornamental grasses, placed to create the appearance of a dry riverbed.

Animal management facilities were improved by adding oﬀ-exhibit denning areas for the lions, and the upgrading of existing animal shift doors in the lion and tiger transfer areas. Site and viewing improvements included complete rebuilding of the public viewing windows located at the east and west ends of the habitats with new frame-work and laminated glass windows. Vine-covered steel trellis structures were erected at the viewing windows to provide shade and to reduce glare on the windows. The perimeter paving and guardrail system around the habitats were reconfigured to provide special viewing overlooks at key points along the habitat. 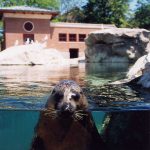